Armenian real estate market grew exponentially between 2002 and 2008 with prices going up by 570%. In 2009 the country’s economy was hit by the global financial crisis and real estate prices went gradually down over the next few years. They remained generally unchanged during 2014-2017 and only a minor growth (2%) has been recorded this year. 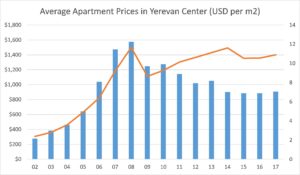 Average rates for mortgage loans were 10.5% in USD as of September 2017. These rates are still relatively high and mortgage loans are out of reach for the majority of Armenia’s population. However, interest rates on mortgages have also been decreasing over time. For example, in 2015 they were closer to 13% while in 2009 they almost reached 18%. ]

The World Bank expects that Armenia’s GDP will grow by 3.2% in 2017 and the government expects a growth of 4.5% in 2018. The limited construction of new dwellings will also contribute to the rise in real estate prices.

Prices shown in the table reflect the average prices in the central district of Yerevan. The data is collected and published by the government of Armenia at www.cadastre.am.